A very strange yet very real thing happened to me while climbing with Zeke at the Hive North Shore last week. I learned something – your mind is unbelievably powerful. Who knew? Well, I suppose some people have already learned that, but to experience it in real-time is well, kind of remarkable. What’s even more remarkable is when they work together, in opposing ways that force you to rethink everything you thought you knew.

Confused? Think back to the first time someone got you to pat your head and rub your belly at the same time. Was it easy? Did it ever become easy? Think about how it felt to consciously separate the movement of your two hands and have them do two fairly opposite movements. It hurt your brain right? (and are you trying to do it right now?) You were forcing your brain to rewire. Now imagine you’re learning to juggle. You know how it should look, you know the basic principles but both sides of your brain are working in opposite ways, as well as your body. It’s counterintuitive. But…once you get it that first time…something clicks. The lightbulb goes on, the penny drops…pick your metaphor. 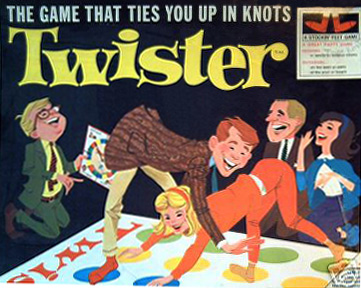 Which brings me back to last week. It started off with a very steep problem that is basically a ladder climbing up on a steep curve to the top of the wall. Whenever you climb at this angle every single movement takes a ton of energy. You’re carrying all of your weight (and this is when I really wished I weighed a lot less!) on your arms and legs and if you dawdle at all your arms strain and you inevitably fall. There’s only so long a person can hang on, even with great grip strength. I love climbing in caves, upside down, steep angles…all of it. It’s so much fun, but pretty much some of the hardest physical climbing there is. And…your brain has to work in a new way. When climbing in a cave, or at a steep angle your hands and feet have to work together but in opposite ways. This is why I think a lot of engineers or physicists are also good climbers. They get the mechanics of it. I wish I could explain it all scientificy but hey, since most of us are not scientists best to talk about it layman’s terms anyways, right? There’s so little keeping you up in a cave that you must rely on counterbalance, resistance and push and pull from your hands and feet. 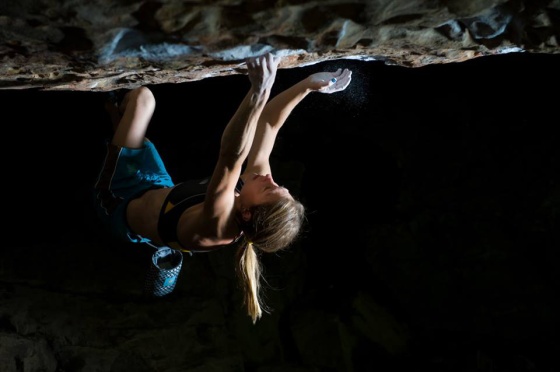 See how climber Lisa Rands is using her right leg and left hand to balance herself in this cave? Photo by Andrew Kornylak.

In any case, I was trying to climb a steep ladder and was just not getting it. It felt next to impossible. Then Zeke gave me some new beta – he told me just to think of climbing a ladder and leading with my hands. Sounds simple, right? Oh right..it’s just a ladder, an upside down ladder, I realized. The next time I climbed it – it felt easy and I finished it no problem. Just a slight mental shift and slight technique shift made the impossible possible. Crazy, eh? 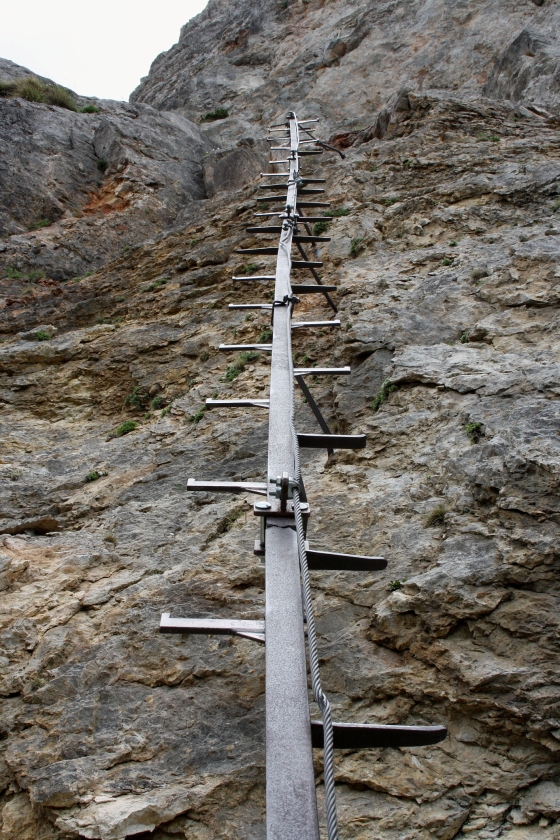 We intuitively know how to climb a ladder or learn it early on as children, but when it’s in the form of a climbing problem sometimes we just need to remember that we know how to climb ladders already. (Photo from Wiki Commons – Haidsteig, Prein an der Rax, Niederösterreich, Österreich)

My next mental test came on a tough problem. The Hive has its own rating system and the easier problems are the in 1hex-2hex (V0-V2) range with things starting to get challenging for me at the 3hex (V2-V4) range. The other day I attempted a 4hex (V4-V6) problem, which is normally far out of my reach. The hardest problems at the gym are 6hex (V8 and up) just to give you an idea. I kept getting stuck at this one section and couldn’t progress. I wasn’t too worried since it was a tough problem, but Zeke was sure I could get past this one part if I just readjusted my thinking and retrained my brain. What I had to do seemed simple – as I reached for a particular hold I had to keep my left foot on and not let it cut loose. I know I know, it seems really simple. SEEMS. But it’s not. The body’s natural inclination is to relax once we’ve gripped something with our hands which often means we forget about what the rest of our body is doing. So when I am reaching up and almost jumping for a hold my leg will naturally lift off. But in this case the key to getting past this section was to keep my left foot on. So, what did I have to do? As soon as my right hand hit the top hold I had to shift focus and think about my left foot. That’s all. But I had to tell my brain this as it happened. And guess what? It totally worked! I forced my brain to think about my foot as soon as I caught the right hold and I not only kept my left foot on but was able to progress further in the problem. I was completely amazed. I got a serious buzz from it and an intense confidence boost which allowed me to flash (flash means to get a problem/route the first time in climbing) another hard problem in the gym (well, hard for me.) This is one of the reasons that climbing never gets boring and is constantly stimulating and challenging. It’s tiny little mental and physical shifts like this that allow the impossible to become possible. And if we can do that on a simple climb, why not life? Sometimes the smallest shifts lead to the biggest changes. Sometimes we have to force ourselves out of our comfort zones in order to re-think the way we do things or the way we see things. Needless to say – it was one of the best climbs I’ve had in weeks, perhaps even months.

Climbing is such a physically demanding sport that we sometimes forget that it really does require our brains just as much as our bodies. The best climbers may not even look like the strongest ones (though of course the best climbers are alway ridiculously ripped) because the best climbers have a whole arsenal of qualities that they have worked on that make them the best. They are strong and fit, yes, but they are also strong-willed, determined, willing to fall A LOT, notice subtlety, are aware of everything their body is doing and their mind is thinking, encourage others and are humble enough to accept help and are able to push all of their boundaries through trial and error and training and focus. Anything is possible when the mind is free. I even noticed this when horseback riding this week. The thing about working with animals is that they pick up on your emotions, and even your thoughts (if you’re distracted) and any other energy that may be coming from you. When I went to ride this week I was a bit distracted and stressed and rushed to start off with, and my horse reacted accordingly. By 20 minutes in I had found my groove and was much more relaxed and so was he. It’s remarkable. And climbing is very similar to this. If I start off stressed and anxious or distracted I have a very hard time climbing anything. I’ve had to take time outs where I just sit and let my mind still before I can even get on the wall or on a boulder. That works wonders. Yoga and meditation are great ways to improve your climbing FYI. 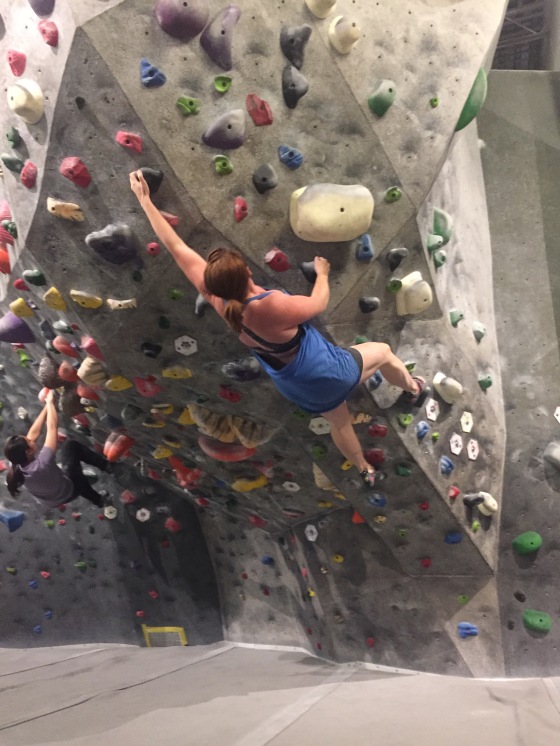 Things often seem out of reach until we actually reach for them.

So when you’ve hit a wall (pun intended) in climbing, or life, think about your mental focus. Think about what you can change, how you can approach something differently and what subtle change can make all the difference. Let’s see if I can remember it for next time. Happy climbing everyone!

I’ll leave you with this awesome video of Chris Sharma (one of the best climbers in the world for those who don’t know the climbing world) tackling a V15 cave problem. Yep, V15 as in V is for VERY hard and 15 is the number of years I’d need in order to maybe do a couple of moves on this.

← Finding inspiration – 5 things that inspire me
Another boulder, another busted ego → 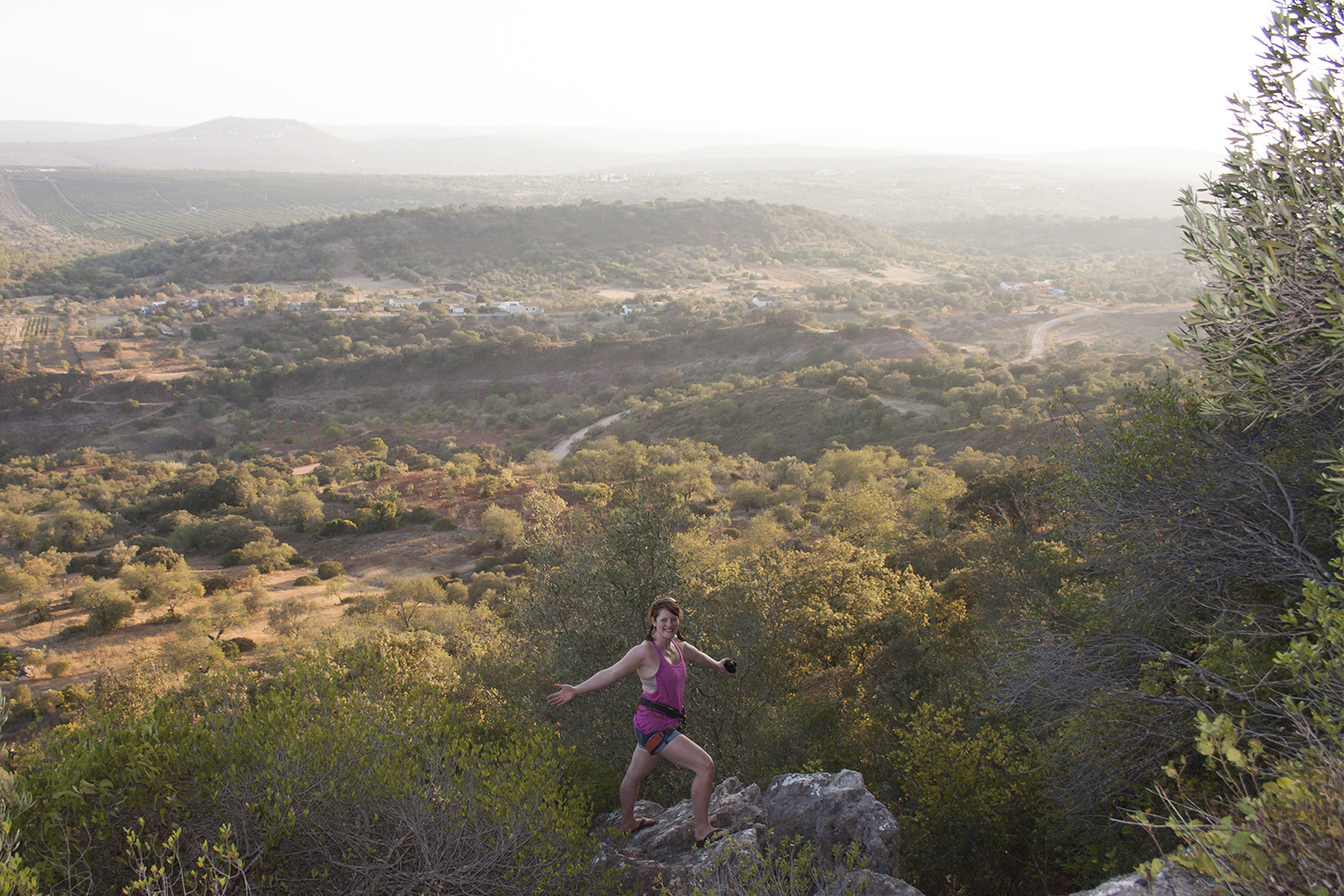 A blog about climbing, health, travel and the general the ups and downs of life - how we move through them, and how we laugh a little along the way.
Loading Comments...
%d bloggers like this: